Top 10 Interesting Facts About The USA 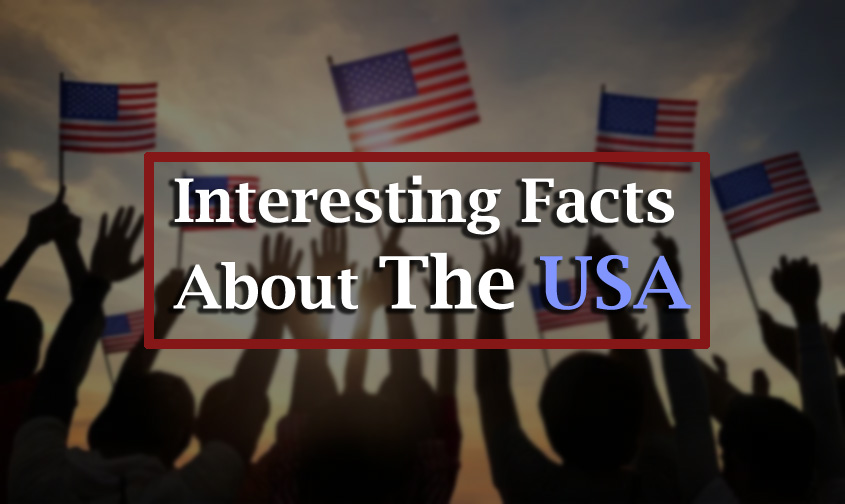 The United States of America is a huge country with a lot to see and do. There aren’t many countries that span thousands of miles, have tropical and arctic climates in one place, and still have enough space for fascinating information.

The entire country has plenty to see, from the beaches of Florida to iconic cities like New York and San Francisco. What’s more fascinating is the vast mix of cultures, stunning natural environments, and fascinating details that have helped to shape the United States into what it is today.

1. New York was once known as New Amsterdam

Before it was called New York, it was known as New Amsterdam, and it was established by the Dutch who chose Manhattan as their home. The name New York was only given to the city later in the 17th century, when it was captured by those pesky English. The name New York was chosen to honour the Duke of York, who assisted in the capture of the city.

2. A palace made entirely of corn exists.

Yes, you can go to a life-size corn palace in the United States. It sounds like something out of a fairy tale, but believe me when I say it’s real.

3. The Statue of Liberty Has French Origins

Three years later, the United States agreed to send the French a slightly smaller Statue of Liberty as a present. This is now prominently displayed at the Pont de Grenelle in Paris. Perhaps the American version has a New Yorker twang to it?

4. Alaska was once a Russian Territory

Alaska was not a part of the United States until the early nineteenth century. It was, after all, a part of Russia. It wasn’t until the Americans bought it that it became a US territory.

Alaska was not officially recognised as a state until 1959, nearly a century later. The state also has several national parks, including Denali, the United States’ tallest peak.

5. The Liberty Bell is from London

The Liberty Bell was manufactured in the same factory as Big Ben in London, which is an interesting and unusual reality. The Whitechapel Bell Foundry can still be visited today – just make sure you get to London first.

Cabazon’s Dinosaurs were originally designed to attract customers to a restaurant. They’ve evolved into a sight to behold in their own right. These retro-style dinosaurs are a throwback to the 1970s. Dinosaurs can still be seen today, and you can also shop in Dinny the dinosaur’s stomach.

7. The Golden Gate Bridge never stops getting a makeover

Because of its immense scale, the bridge is constantly being repainted and remodelled for our enjoyment.

8. London Bridge is located in Arizona

This was the case nearly 200 years ago, but don’t things change over time? The city of Lake Havasu, Arizona, was looking for a new bridge in the 1960s, and when they heard that London Bridge was up for sale, they decided to offer to bring it to their city. After all, who wouldn’t want to be surrounded by those famous towers and opening arches?

9. You can find lots of secret scenic views in New York

City Hall Station, for example, is a beautiful location that, while not always available, can be found underneath the sidewalks. The whole city is littered with secret nooks and alleyways.

10. There are 43 giant presidential heads

If that isn’t one of the most fascinating things about presidents, I’m not sure what is!

One of the most bizarre sights to see was hidden in Houston, Texas. Heads of giant presidents! There’s a whole heap of these carved presidential heads that used to live in an old parking lot, and they’re about 15 feet tall.

Remember to explore all the coolest spots in the USA on your next trip and discover more interesting trivia about the land of the free!