Top 10 Bizarre Foods to Try Before You Die! It’s time to take the tour around the world and look into all the bizarre foods that our species like to chew down. Unluckily, this world is not full of those tasty breakfasts. There is a long list of pungent, weird or just plain scary foods out there to sample.

Here are the 10 weirdest and most intriguing eats from all corners of the globe that you should try at least once before you die! 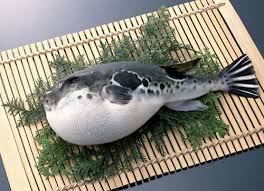 Fugu is a Japanese pufferfish that contains enough poison to kill 30 people. Served in a stew, grilled or as paper-thin sashimi, any small mistake in preparation could mean an untimely end to the consumer. Those wishing to try this deadly delicacy should visit Japan during October to March when Fugu is in season. Eggs are a common food throughout the world but in the Philippines, they take it one step further by taking a developing duck embryo and then boiling it alive while still in the shell. Typically eaten with a little seasoning of chili, garlic and vinegar, all the contents of the egg are consumed including the visible wings and beak. It is considered Scotland’s national dish and this mixture includes sheep’s heart, liver and lungs, onion, oatmeal, spices, and stock. Normally stuffed into a sheep’s stomach and boiled, this hearty dish dates back to the 1400’s and today is served as the main course of a Burns supper on Robert Burns Day. Don’t get fooled by its look. It may look like a grain salad, but this dish is actually made up of ant larvae. Often called insect caviar, escamoles are considered a delicacy in Mexican cuisine and consumption dates back to the Aztecs. Surprisingly pleasant, these little larvae are crisped up with butter or deep-fried and have a slightly nutty taste. Hamburgers, french fries and fried-brain sandwiches? In some areas of the USA, particularly in the Ohio River Valley, this curious sandwich is still found on the menu. Made from sliced calves or pig brains that have been heavily battered and deep fried, heavy on the calories, this sandwich is typically served accompanied with mustard and pickled onions.

The stomach lining of various animals with a sponge-like honeycomb texture looks like some weird kind of sea plant life and has a peculiar and not entirely appetizing rubbery texture. It is served with various sauces to add flavor or simply with the onions. The famous mystery meat! It’s said that Spam is made up of chopped pork shoulder meat, ham and potato starch, but who knows what ends up in there. Baltic Sea herring fermented with just enough salt used to prevent it from rotting. Mainly found tinned in brine these days, when opened it releases such a pungent aroma that it usually needs to be eaten outside. Sounds delightful! Sannakji or sannakji hoe is a variety of hoe, or raw dish, in Korean cuisine. It consists of small octopus that has been cut into small pieces and served immediately, usually lightly seasoned with sesame and sesame oil. Fried spider is a regional delicacy in Cambodia. In the Cambodian town of Skuon, the vending of fried spiders as a specialty snack is a popular attraction for tourists passing through this town. Traditionally, only the legs are eaten, with mixed reviews on eating the abdomen.