Trophies and awards are offered up to what we consider the pinnacles of sporting excellence each year in various different sports across the world. The most popular are football trophies, cricket trophies, golf trophies and various other trophies and medals in countless other sports. The pursuit of these trophies make up countless hours of entertainment, frustration, heartbreak and tears for many sports fans and players. We have a run-down of the top ten most prestigious sports trophies in the world. 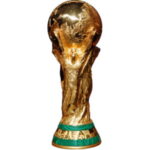 The FIFA World Cup Trophy is named after former FIFA President Jules Rimet. Made up of an 18-carat gold body with a malachite base, and depicts two people holding up the Earth the World Cup tournament is the most popular global sporting event, even more popular than the Olympics, it is safe to say that it is the most sought after trophy worldwide. 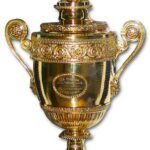 Wimbledon Tennis Trophies – The Gentlemen’s Singles champion receives a silver gilt cup. The trophy has been awarded since 1887 and bears the inscription: “All England Lawn Tennis Club Single Handed Championship of the World.” The Ladies’ Singles champion receives a sterling silver salver commonly known as the the “Rosewater Dish”. The salver is decorated with figures from mythology. 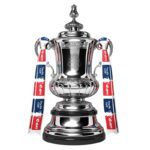 Football has always enjoyed special passion in England. The winning team in the Primary English Association Football received the FA Cup. The FA Cup is a domestic tournament under the Football Association Challenge Cup. It was started in 1871 which is also one of the oldest played tournaments in English club football circuit. The FA Cup is also one that has experienced theft several times when the first piece was stolen in 1895 and the present cup is the fourth in number. 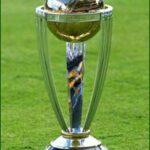 The ICC Cricket World CupTrophy is presented to the winners of the World Cup finals. The trophy was designed and produced in London by a team of craftsmen over a period of two months.The trophy is made from silver and gild, and features a golden globe held up by three silver columns. 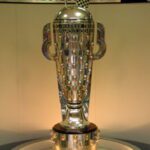 IndyCar Racing hands out a milk bottle to each winner of the race, alongside an 18-inch replica of the Borg-Warner trophy. Each champion’s face, average speed and date of victory are added to the real trophy, which weighs over 100 pounds and extends over five feet in height. 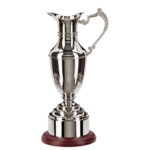 The Claret Jug Trophy is handed out at the Open Golf Championship (a.k.a. the British Open) which dates back to 1860. This tournament is golf’s oldest major championship and, given its history, it holds a lot of prestige for its victors. 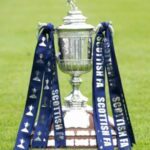 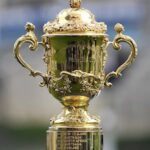 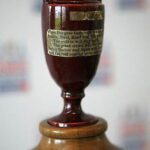 One of the most celebrated cricketing tournaments is the Ashes Series played between England and Australia. The winner of the series receive the Ashes Urn as the victory trophy. Interestingly, the original urn is always up for reserves at the MCC Cricket Museum. The winners receive a replica of the same. The practise of awarding the replica too, was initiated from 1998-99 onwards. It is a creation by Waterford Crystal – a noted English name. 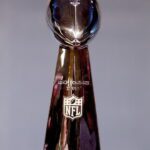 The Lombardi Trophy awarded to the winners of the Super Bowl is sterling silver and was made by Tiffany &Company. Originally called The World Championship Game Trophy its name was changed in 1970 after the passing of an iconic coach.After each Super Bowl, the winning team’s name, date, and score of the game are engraved.The Lombardi trophy has become much more iconic in recent seasons, because of the elaborate presentation of the award.